Upycling Europe: An ERASMUS+ project about the awareness of cycling In an increasing number of European cities cycling has more and more become part of our daily awareness of life. Cycling in cities is no longer merely a means of transport. On the contrary, a kind of “bicycle culture” has developed all over Europe. Apart from ecological aspects like climate protection, heathy air and less noise, cycling is simply a lot of fun. In addition, getting from A to B in a city is of 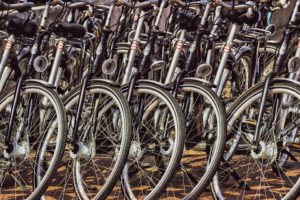 ten much quicker by bike than by car or public transport. It has been common knowledge for quite some time that cycling is good for one’s health. Therefore  cycling is just one aspect of people’s wish and efforts to lead a healthy and sustainable way of life. At the same time, cyclists are increasingly proud if they are able to maintain and repair their beloved bikes themselves with the help of some basic know-how.

The Erasmus+ project “UPCYCLE EUROPE” is financed by the EU and deals with the topics of cycling and bikes.

Students from schools in four different countries are working together:

From September 2018 to August 2020 we are working on the following topics: